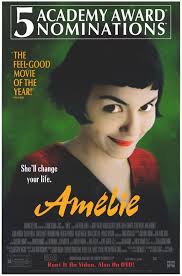 If you haven’t seen it, you’ve surely heard of it. Jean-Pierre Jeunet’s 2001 rom-com was a world-wide hit, and is now one of the most successful French films ever made.

Amélie is a waitress in a café in the Montmartre district of Paris (a real café, as it happens, that now makes a tidy living out of serving expensive coffee to Amélie fans). Her solitary life is transformed when she discovers a talent for secretly changing people’s lives for the better. She sets about fixing her friends, neighbours and co-workers, matching up lovebirds, avenging the downtrodden, comforting the lonely, all without anyone realizing that Amélie is behind it. But can the incurably shy young woman find the courage to fix her own life? (Spoiler: yes.)

It’s quirky and surreal, an unrealistic fairy-tale of a story set in an unrealistic picture-postcard Paris. Some people complain that it is too whimsical, twee, and sentimental, but those people have withered hearts and do mean things to kittens for fun, so we can dismiss their opinion. Amélie is a lovely film. Put your cynicism aside for a couple of hours, and bask in it.

And here’s a scene from the film, in which Amélie decides to teach the bullying local greengrocer a lesson: