One of my favourite French writers to teach is Simone de Beauvoir, the twentieth-century writer and thinker who more or less kick-started modern feminism with her monumental essay, Le Deuxième Sexe (The Second Sex). A startling amount of what she says about the roles women are expected to play in society, in childhood, marriage and motherhood, retain a lot of truth more than sixty years on. Her analysis of how women are represented in literature, art and folk culture is eye-opening. Read it, and you’ll never watch the female characters in a Hollywood movie in quite the same way again. Some students are provoked by Beauvoir’s ideas; others are inspired. Nobody is indifferent to them.

But enough from me. The writer and comedian Nathalie Haynes is a fan of Beauvoir, and recently wrote in The Independent about her experience of discovering the writer for the first time. The full article is here, and here’s a short extract.

“I hesitated for a long time before writing a book on woman. The subject is irritating, especially for women; and it is not new.” That’s an audacious way to begin your masterwork. And this witty, astringent tone pings throughout Beauvoir’s writing.
No wonder, when you consider who she was reading. On the second page [of Le Deuxième Sexe], Beauvoir quotes one of my favourite lines from Dorothy Parker: “I cannot be fair about books that treat women as women. My idea is that all of us, men as well as women, whoever we are, should be considered as human beings.”If I had to summarise my own feminism, it would boil down to this: women are the same thing as people. That’s it. They aren’t a weird, incomprehensible sub-group, they’re just people. This is why Freud’s ponderings on what women might want have always annoyed me: women don’t all want the same thing any more than men do. Why on earth would we? We’re not members of some bizarre cult, we’re just people. So we tend to want the same thing as some other people would want. In this particular instance, I wanted to go on reading The Second Sex, because it’s hard not to like someone who likes the same bits of Dorothy Parker as you do.

We’re so used to seeing austere photographs of Beauvoir, her eyes slightly hooded and her mouth set in a straight line, as though she was thinking high-minded thoughts about a complicated thesis. She was half a head taller than Sartre, and she had the slight stoop of a woman who didn’t want to use her height to intimidate. Why bother, when you had a brain that could crush a person without breaking a sweat? But there are a couple of pictures of her where she was caught in a less formal pose, and a smile rearranged her features. The hooded eyes crinkled with merriment and – in her later years especially – there was something joyously expectant about her. It reminds you that she was probably a lot happier than Dorothy Parker, even if Parker was funnier. 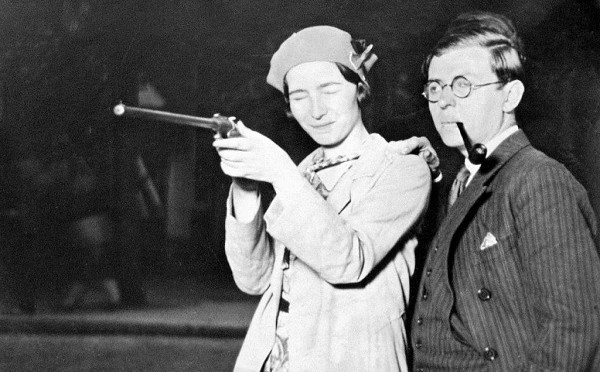 If you’re interested in discovering Beauvoir for yourself, I have three recommendations for you. Mémoires d’une jeune fille rangée [Memoirs of a Dutiful Daughter] is her celebrated autobiography of her childhood and adolescence, using the example of her own life to show the social and familial pressures on women to conform. If you’d prefer to try her fiction, and to start with something shorter, the title story of the collection, La Femme rompue [The Woman Destroyed] is a good place to start: it tells of what happens when a woman who’s defined herself as a wife and mother finds that neither role is needed by anybody any more. Lastly, if you want to tackle her ideas directly, the Mythes section at the end of the first volume of Le Deuxième Sexe is her take on how society’s view of what women are and how they should behave has been shaped by images, myths and stories from the Virgin Mary to  D. H. Lawrence’s Women in Love.