Whilst France is proud of its republicanism with ‘liberté, égalité, fraternité’ as its motto, and of its secularism or ‘laïcité’, many of its traditions go back to the ‘Ancien Régime’, the pre-revolutionary catholic monarchy. One of these is derived at once from marking Epiphany or Twelfth night (‘l’Epiphanie’ or ‘le jour des Rois’) when the three wise men (‘les rois mages’ or magus kings as they are known in French) are said to have bestowed gifts on Jesus, and from carnivalesque celebrations in which social hierarchies could briefly be reversed, in the spirit of the Roman Saturnalia. The ‘galette des Rois’ is the sweet pie served on the ‘jour des Rois’. Like Victorian Christmas puddings, it contains a charm. Originally ‘galettes des Rois’ were baked with a raw broad bean or ‘fève’. Whoever found it in their portion became king or queen for the day. Modern boulangeries and pâtisseries offer a bewildering variety of ‘galettes des Rois’ with little china or earthenware charms called ‘fèves’ after the more prosaic pulse used in bygone years. The first of these porcelain charms are thought to have been in the shape of babies meant to represent Jesus. When the Revolution briefly renamed the ‘galette des Rois’ ‘galette de l’Egalité’, the republican ‘bonnet phrygien’ or Phrygian cap was the inspiration for the shape of the ‘fève’. The most usual recipes for ‘galette des Rois’ are of ‘pâte feuilletée’ (puff pastry) filled with ‘frangipane’ (frangipani or almond stuffing), except in the South of France where the ‘gâteau des Rois’ is a brioche flavoured with orange blossom (‘fleur d’oranger’).

When the pudding is served, chance plays its part in the selection process which is called ‘tirer les rois’: the youngest member of the party, ‘le benjamin’, squats under the table and calls out the name of the person to whom each piece of the ‘galette’ is to be given. You become king or queen, can choose a consort and are allowed to keep the ‘fève’ if it is your piece of pie. Collectors of ‘fèves’ are known as ‘fabophiles’. Nowadays, pâtisseries and boulangeries supply paper crowns when you purchase a ‘galette’ and the ‘fèves’ come in many shapes, from cartoon characters like Astérix or Tintin to famous people like Marie-Antoinette or Napoleon, from Provençal ‘santons’ to cars, planes or all manner of other things including rings—which may allude to one legend: that the inspiration for the first ‘fève’ was the heroine of Perrault’s fairytale, ‘Peau d’âne’, losing her ring in the cake she baked.

In the latter half of the eighteenth century, before the Revolution, when republican ideals were being actively discussed by some intellectuals, the ‘philosophe’ Denis Diderot (1713-1784) wrote occasional verse when he became ‘roi de la fève’ two years running. Here is the beginning of the ‘Complainte’ in which he refers to ‘les embarras de la royauté’, the particular troubles one has to face when one is monarch.

Quand on est roi, l’on a plus d’une affaire,

The stanza uses different types of lines (‘vers hétérométriques’). In French verse, stresses are not counted but syllables are and, on the whole, give their name to the lines (the exception being the twelve-syllable line more often called ‘alexandrin’ or alexandrine than ‘dodécasyllabe’, and of which there are two in the last quotation infra). Here you have examples of ‘décasyllabes’, ‘octosyllabes’ and a final ‘tétrasyllabe’ (which acts as a refrain in the rest of the poem). Diderot was a famous thinker and writer, but did not go down in history as a great poet. This is a piece written for fun rather than for posterity. A little further along Diderot says that when he fell asleep during his term as king, in his dreams he carried out heroic exploits and made new laws of a particular kind:

But then writing bad verse, he adds, is not a cardinal sin, even if you are a king!

Avoir une affaire: nowadays ‘affaires’ refer to business. A businessman or woman is ‘un homme ou une femme d’affaires’, if you work in business you are ‘dans les affaires’. If you say ‘j’ai une affaire en ville’ it means I have some business to sort out in town. In the poem ‘avoir plus d’une affaire’ means to have a lot on your plate which you need to sort out.

Arsenaux à munir: ‘arsenaux’ is the regular plural of ‘arsenal’, which was originally where warships were built and armed. It is also, as in English, a weapons depot—and that, incidentally helps explain why Arsenal footballers are known as ‘the gunners’. ‘Munir’ here has the same root as ‘munitions’ (the noun exists both in English and in French). It basically means to stock up or equip. It can be used simply to say that you have what you need for a particular purpose: ‘pour faire mes courses, je suis muni(e) d’un gros sac’ means you are well prepared with a big bag to go shopping.

Hargneux is an adjective formed on the noun ‘hargne’, spite, so it means spiteful or aggressive.

Prévenir : Here it means to prevent, as in the popular saying ‘mieux vaut prévenir que guérir’. Often it is a synonym of ‘avertir’, to warn. Here is a 1774 painting called Le Gâteau des Rois, housed in the Musée Fabre in Montpellier. It is by one of Diderot’s favourite artists, Jean-Baptiste Greuze (1725-1805). It is a ‘scène de genre’ or ‘genre painting’ showing ordinary people in a domestic setting and is a far cry from some of the grandiose mythological pictures which other contemporary painters produced. Greuze made a point of representing family members in their homes, usually wearing their everyday clothes. Here, our attention is drawn to the expressions on the characters’ faces: something special is obviously happening. One piece of the ‘galette des Rois’, in the middle of the picture and of the table, has been set aside. It is probably the ‘part du pauvre’ (literally, the pauper’s share), traditionally kept for anyone who might walk in. The youngest child is not hidden under the table as he would be nowadays. He is pulling the pieces of cake out of a white napkin held by the paterfamilias as the names of the people present are called. Greuze shows how a simple event can turn into a ritual and a moment of domestic harmony. It suggests that you do not need wealth and luxury to enjoy moments of peace and happiness. posted by Jessica Allen, second-year student of French and German at Jesus College

The Oxford modern languages degree places considerable emphasis on the study of literature. With most schools teaching very little or even no literature as part of their modern languages curriculum, it can be very difficult to know where to start. Here I’m going to share my own literary journey thus far to hopefully inspire those who are still at school to develop their interests and to not be intimidated by the really quite challenging task of tackling their first foreign novel. 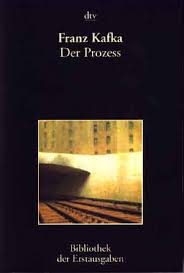 This story actually begins with my discovery of German literature. I was fifteen years old and inspired by the fleeting reference to Kafka in Bridget Jones’ Diary to read some of his work in the original German. My German teacher told me that this would be impossible for someone who hadn’t even done her GCSEs, so, determined to prove her wrong, I spent three months teaching myself advanced German grammar and reading children’s books. Then suddenly I was reading Kafka’s works and understanding them in German. I felt a great sense of achievement and knew then that what I wanted to study was German literature.

I was also curious about French, the other language I was studying. I wanted to do the same thing, although I had no natural starting point to lead me into the literature. So one lunchtime I went into the school library and headed over to the solitary shelf of French literature. I picked up Diderot’s Supplément au voyage de Bougainville, mainly because it was the shortest. It was also the best introduction to French literature I could have had at the age of sixteen. From next year, this will be a prescribed text for first years at Oxford, therefore it’s an ideal book for those who are just starting their literary studies. It’s written in dialogue form and when I read it for the first time I had never seen anything like it, which instantly made it more interesting. It also means that it’s easier to understand it, for the two opposing points of view are always clearly represented by the dialogue participants, and it’s certainly easier to get through than a six hundred page novel. When I first read it I was ignorant of the context in which it was written and applied the book’s lesson about universal values and a return to nature to my own teenage existence. It all began to truly make sense as I found out about the original context of the text: it was written in the eighteenth century in order to criticise the social and political structures in France prior to the Revolution by comparing them to the basic moral codes based upon nature which governed Tahiti. I began to actively consider the concept of universal values and luckily my google searches led me to more eighteenth century texts which explore similar themes in the same context: Voltaire’s Candide, Montesquieu’s Lettres Persanes and Rousseau’s Le Contrat social. I devoured them and eventually made them the subject of my EPQ (Extended Project Qualification). I had fallen in love and I knew that wherever I went to university, there had to be lots of eighteenth century French literature. So if you’re in sixth form, I would definitely recommend these texts as a way into French literature. Eighteenth century French is often easier to understand than that of the nineteenth and twentieth centuries, plus the idea of challenging a long-established regime and system of values as expressed in these texts certainly appeals to frustrated teenagers.

So where did I go from there? Well I spent the rest of sixth form reading any French and German literature I could find. This was helpful not just in terms of my Oxford application, because it gave me plenty of ways to show that I was interested in taking languages further, but also because when I arrived here for first year I wasn’t daunted by the reading list or by the task of tackling foreign texts because I’d already been doing it for a couple of years. Okay, as a second year I now look back and laugh at the naïve and simplistic views of these texts that I often expressed whilst still at school, but even as you progress through Oxford your thought process is always changing and it’s often fun to contrast your current interpretation with your previous. Above all, I genuinely enjoyed discovering the wonders of French literature and it is certainly the best way to practice your language skills outside of the classroom, as teachers always encourage you to do. So my advice to sixth formers is to read any French texts which take your fancy and hopefully find some that really interest you. Don’t worry if you don’t understand certain phrases or references and try to work on grammar and vocabulary before you do it, however tedious it might seem, because it all really helps in the long run!