The BBC’s musketeers rumble on, not having a great deal to do with Dumas’s novel, to be honest, but entertaining none the less. The adventure-of-the-week is generally entirely made up by the show’s writers, but the occasional scene, like Richelieu’s offer to d’Artagnan to join his Red Guards, or longer story-arcs, like the emerging back-story between Athos and Milady, come from the novel more or less intact. The free adaptation makes the show more interesting for people who already know the book, as it leaves us guessing which parts of the original story will make it into the programme. I know what the novel has in store for Constance Bonacieux further down the line, for instance, and I know that the filmmakers could hardly do better if they wanted a dramatic end to their first season, but is that really where we’re heading? I’m still not sure.

I want to talk a little about d’Artagnan in this post, though, and how Dumas’s version differs from the BBC one. Our first impression of him on TV could hardly have been further from the novel. Dumas’s d’Artagnan starts the story as a cocky, happy-go-lucky teenager out to seek his fortune in Paris and pick a fight with anyone who gets in his way. ‘Puppyish’ is a fair description, and 1980s Spanish cartoon series, Dogtanian and the Three Muskehounds actually got his character down quite nicely. Luke Pascalino’s d’Artagnan, however, starts off brooding and grief-stricken, heading to the capital to avenge his father’s death by seeking out the sinister, black-robed Power-Behind-the-Throne he holds responsible for the killing. That’s not Les Trois Mousquetaires, that’s Star Wars. (Might Peter Capaldi turn out to be Pascalino’s real father? Let’s not even think about it.) Thankfully, he cheers up a bit in later episodes, and the series gets a little closer to the novel’s boisterous spirit, but the initial idea behind the series does seem to have been to ‘go dark’ with its source material in much the same manner that Christopher Nolan set out to drain all the fun out of Batman in his film trilogy. 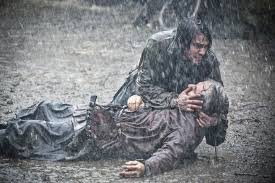 There is one moment in Dumas’s novel, though, which generally fails to make it into modern adaptations, where d’Artagnan suddenly comes across as very dark indeed. D’Artagnan has befriended Milady’s maid, Ketty, and inveigled his way into her room, from where he can eavesdrop on Milady through the thin partition wall. After learning Milady’s plans, d’Artagnan declines to leave Ketty’s room. Here it is in the original French:

And here’s a translation of the same passage :

“Silence, silence, begone!” said Kitty. “There is nothing but a wainscot between my chamber and Milady’s; every word that is uttered in one can be heard in the other.”

He drew Kitty to him. There was no way to resist, resistance would make so much noise. Therefore Kitty surrendered.

It was a movement of vengeance upon Milady.

Worse still, this is only the first step in d’Artagnan’s vengeance. ‘Seducing’ Ketty is part of a plan to gain him access into Milady’s bedroom under cover of darkness for a night of passion, all the while pretending to be Milady’s lover, the Comte de Wardes. Later, he will mockingly inform Milady of the earlier deception after seducing her in his own name with the lights on. So is our hero d’Artagnan in fact… a serial rapist? He certainly seems to have non-consensual sex with both women, even if Ketty bears no grudge about it (quite the opposite, in fact), and Milady consents to sleep with d’Artagnan both when she knows who he is and when she thinks he’s de Wardes. We are, of course, dealing with a nineteenth-century depiction of seventeenth-century social mores, so we must be careful to bear in mind the historical context when we judge things from our own twenty-first century perspective. And if one thing is clear, it’s that Dumas doesn’t think his hero has done anything wrong at all. But there’s a moral murkiness to d’Artagnan’s behaviour in the novel, to say the least, which has been wiped clean for the BBC TV adaptation. And without it, Milady’s obsessive pursuit of d’Artagnan, and the terrible harm she may later cause him, make much less sense. Dumas’s Milady may be a caricatured villain in many ways, but at least in the novel she’s not just being evil towards d’Artagnan for the fun of it. She has good reason.